The "We Didn't Think This One Through" Rule

New rules from the *CFPB will dramatically affect the ability of all borrowers to obtain mortgages. This post will analyze and expose the devastating effects of a second rule – the 3% rule.
The “We-Didn’t-Think-This-One-Through-Just-Ask-Texas-Mortgage-Originators” 3% Rule
The bureau’s general guideline reads
No excess upfront points and fees: A Qualified Mortgage limits points and fees including those used to compensate loan originators, such as loan officers and brokers. When lenders tack on excessive points and fees to the origination costs, consumers end up paying a lot more than planned. 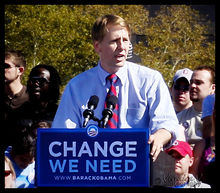 The last post began with “Richard Cordray of the CFPB declares ‘All American borrowers are stupid and we have to save them.’" Of course, he didn’t say it exactly that way but the proposed rules effectively say it. [That's him on the right. Don't be fooled - I'm sure no head of a bureau created by Dodd-Frank could possibly be a political activist. Ignore the Barack Obama poster in front of him.]
One of those rules that will allegedly protect consumers is the 3% Rule.
The 3% Rule is a cap on closing costs. It requires that closing costs cannot exceed 3% of the loan amount. (There is some variance for loan amount less than $100,000). Also, the bureau has only vaguely specified what fees might be exempt from this accounting. It has, however, signaled that the loan officer compensation will be counted against this fee cap. While a CFPB bulletin in January 2013 stated that
The Bureau has decided not to finalize the proposal [something about LO compensation] at this time, however, because of concerns that it would have created consumer confusion and other negative outcomes. The Bureau has decided instead to issue a complete exemption to the prohibition on upfront points and fees pursuant to its exemption authority under section 1403 while it scrutinizes several crucial issues relating to the proposal’s design, operation, and possible effects in a mortgage market undergoing regulatory overhaul.
A **bulletin released in April of this year indicates the full implementation to include Loan Officer Compensation in the 3% limitation on closing costs.
To those outside the industry, this may appear confusing at worst and falsely helpful at best. Let me give you 5 facts that will help clarify:
1.    Costs are not the same as prices. The many costs that comprise “closing costs” are insensitive to government regulations. Appraisers, for example, do not lower their fees because some agency requires that the totalfees not exceed a certain amount. Neither do the gas stations (from which they purchase the fuel to power their vehicles) lower the price of their product as the appraisers travel to the properties to perform their inspections. While prices are capped by government, costs cannot be so easily controlled.

2. Loan Officer Compensation is not the same as the origination fee, the processing fee or other fees listed as going to the lender.

3. Loan Officers are most frequently paid not only from any “origination fee” but from the yield paid by the investor-lender which funds the loan. Think about those things that are almost a thing-of-the-past, the “no closing cost” loan. With no closing costs, including no origination fee, how do you think anyone was paid. They were paid by the investor who purchased the loan which was made at a higher than “par rate” which paid a specific percentage of the loan amount.

4. These yields can go as high as 7%-8% but are often “eaten up” in other costs. (More on that later; but, they are called LLPA’s Loan Level Pricing Adjustments . . . another way for Fannie and Freddie to collect fees).

The CFPB’s proposed rules – specifically the 3% Rule - regarding the “ability to repay” are unnecessary and harmful to the economy and the lending industry but mostly to consumers. Here’s why, point by point.

**The CFPB bulletins and publications are poorly dated but the URL address above indicates that the publication is most likely from January of 2013. But the readiness guide dated 7/8/2013 (http://files.consumerfinance.gov/f/201307_cfpb_mortgage-implementation-readiness-guide.pdf) has listed the following web-based publication which lays out guidelines for caps on points and fees which are to include Loan Officer Compensation. As you can tell, it is dated in April of this year. http://files.consumerfinance.gov/f/201304_cfpb_compliance-guide_atr-qm-rule.pdf